What about Our Groundwork?

To be well grounded in any subject is an assurance of efficiency. Right foundations must be regarded not only as important, but as indispensable. Unsuccessful work, of whatever nature, is generally the result of poor preparation. The groundwork has not been satisfactory. The flier knows that not only his achievement, but actually his safety and that of his aircraft, depends as much upon the conscientious, meticulous work of his ground crew as upon his skill as a pilot.

A superstructure may be attractive and temporarily successful, but if its foundations are faulty it will not endure. This applies no less to character than it does to human workmanship. Paul, with his unequivocableness, and above all his inner experience, put it bluntly when he wrote to the Corinthians, "For other foundation can no man lay than that is laid, which is Jesus Christ." This being so, it is well to study what is this foundation of which Paul spoke. Foremost we see that it is oneness with divine Principle. From thence there proceeds, with unerring consistency, complete reliance upon and obedience to the divine will. This, translated into human terms, is expressed in qualities of steadfastness, integrity, and allegiance to all that is true. The foundation that is spiritual alone endures; it does the will of God; but it is made manifest also in the humanity which heals and redeems, which brings comfort and peace to mankind. 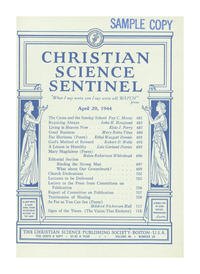