Jesus , the master Christian, healed the sick and raised the dead to demonstrate the truth that Spirit is the only cause. Despite these proofs, however, the fundamental truth he taught was later lost sight of, and for generations mankind searched fruitlessly for that which would bring release from all the distressing and limiting beliefs which constitute physical living. In 1866, Mary Baker Eddy discovered the divine Principle of Christian healing and denominated her discovery Christian Science. Spiritual inspiration sustained her thought in the pathway of Truth and enabled her to restore the primitive Christianity taught by Jesus; whereas human logic led men into the erring way of material-mindedness.

The Christian Science textbook, "Science and Health with Key to the Scriptures" by Mrs. Eddy, acknowledges immortal Mind as alone creative, and thereby repudiates so-called mortal mind and its pretension of a material creation. An understanding acceptance of the Biblical account of spiritual creation, as recorded in the first chapter of Genesis and the first three verses of the second chapter, is fundamental to a true concept of the Science of being. In this record God, Spirit, is revealed as the only cause and creator, and His creation is declared to be good. Contemplation of this Scriptural account enables one to know God as Mind, omnipotent and omnipresent, to acknowledge His spiritual creation as the only creation, and to detect and reject the agelong deception which claims that there is a mortal mind and a material creation. 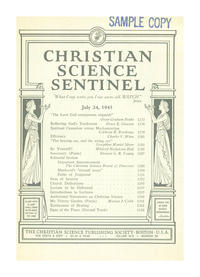