"All of God's creatures"

Janet had attended a Christian Science Sunday School from childhood till the time came for her to join the Services. She chose the Women's Land Army, and although the training took her far from the home in the industrial North of England, where she had always lived, to the heart of an agricultural country in the South Midlands, she was not disturbed, for she had learned in Sunday school that wherever she was, God was present, and that, in reality, she could no more be separated from her Father-Mother God than a ray of light can be parted from the sun, of which it is the reflection. She looked forward to her new experiences as an opportunity to prove this fact, not for herself alone, but also for those with whom she came in contact.

Her training successfully completed, she was sent to a farm in the country which was owned by a young farmer and his wife, with whom she became quite friendly. She loved the work, and was geting on very satisfactorily when rumors of foot and mouth disease amongst the cattle in the district reached them. Her employer expressed apprehension that his animals might be affected. Janet said nothing at the time, but during the evening, when he was reading the Bible, to which he often turned, she asked if he had read the ninety-first Pslam. "I expect so—amongst the others," he said. "Would you like me to read it to you now?" asked Janet. "Yes, if you like," was the reply. Reading slowly and carefully, she especially emphasized the passage, "There shall no evil befall thee, neither shall any plague come nigh thy dwelling." 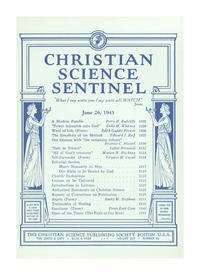