The cause of freedom is not dignified by the prediction that disaster will befall great numbers of brave men who go forth to fight for their country. There is every reason why those who sacrifice so much for the good of mankind should live. Mary Baker Eddy tells us (Science and Health with Key to the Scriptures, p. 325). "He who has the true idea of good loses all sense of evil, and by reason of this is being ushered into the undying realities of Spirit. Such a one abideth in Life,—life obtained not of the body incapable of supporting life, but of Truth, unfolding its own immortal idea."

Christian Scientists are expected to refrain from predicting or prophesying evil, and it is wiser and more profitable to do this than to yield to fear. A part of one of the rules found in the Manual of The Mother Church by Mrs. Eddy (Art. VIII. Sect. 1) reads. "The members of this Church should daily watch and pray to be delivered from all evil, from prophesying, judging, condemning, counseling, influencing or being influenced erroneously." 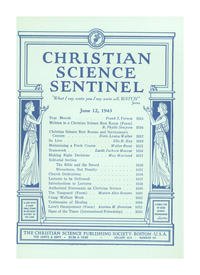