He had been studying and applying Christian Science for several years. It had brought many blessings into his life. He was deeply grateful. But there was an unsolved problem that loomed large. Try as he would to see through it, or around it, there it continued to be, haunting, frightening, discouraging. What could he do that he had not done? Surely the God who was all-loving and all-wise must know the way to freedom and would make that way clear to him.

His simple prayer of right desire was answered. Soon afterward, he found himself thinking of a boyhood experience he had not recalled for many years. As a boy, he had lived in a heavily forested district, and one of his chief delights as a child was to go out into the woods and watch the woodsmen fell the big trees that were to be sawed into lumber. Often he would become impatient to see the big tree fall, but nearly always there was preliminary work that had to be done. There were briars and brambles, thickets, and resisting vines close about the big trees, all of which had to be cut and disentangled before the woodsman's ax or saw could start to fell the tree. Once the preliminary work was done, the tree was soon felled. 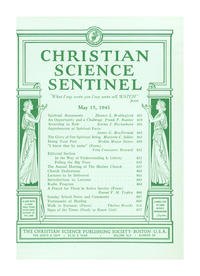