The First of the Beatitudes

Whenever the disciples gathered around Jesus to hear him speak, that place became a classroom. It is not in the least unusual that it was most often out of doors. Standing on a roof overlooking the Mosque of Abraham in Hebron, Palestine, the writer saw a small group of students gather near the Mosque. The teacher joined them, and they went together to a near-by hillside, seated themselves under some olive trees, and the teaching began. Such a scene was witnessed many times during a winter's stay in Palestine.

This is the first of a series of five articles on the Beatitudes, which are appearing monthly in the Sentinel. 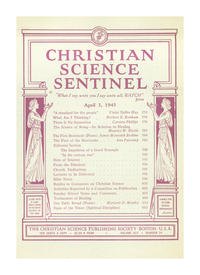