I had been bedfast for three...

I had been bedfast for three years when Christian Science was presented to me by a friend whose life was proof that she had something I did not have, a religion to rely upon. I bought the Christian Science textbook. "Science and Health with Key to the Scriptures" by Mary Baker Eddy, asked help of a practitioner, and was healed of an impacted cuspid tooth, which had been operated on and had resulted in partial paralysis of the body.

After this healing I began the daily study of the Lesson-Sermon in the Christian Science Quarterly, and through a period of thirteen years I have been healed of colds, nervousness, and much fear.

Send a comment to the editors
NEXT IN THIS ISSUE
Testimony of Healing
In gratitude for the many blessings... 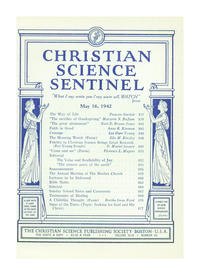