When a child, I had the privilege...

Eda D. Kennedy with contributions from James A. Kennedy

When a child, I had the privilege of attending the Christian Science Sunday School for about two years. Ten years afterward, when lockjaw came upon me, following tonsillitis, the truths learned during those two blessed years came pouring into my consciousness, and I was instantaneously healed.

Our little girl, when eighteen months old, had a cold for several days, and after I had been with her off and on all night, on account of croup, a practitioner was called for absent treatment. By the time the call had been completed, a period of about three minutes, the baby was free. That certainly proved to me again that "the word of God is quick, and powerful." When the same child was three, she was pushed backwards down five concrete steps, hitting the back of her head forcibly on a concrete walk. I called a practitioner, and although there was a deep gash in her head no stitches were taken. She immediately stopped crying, and after a short time the scar entirely disappeared.

Send a comment to the editors
NEXT IN THIS ISSUE
Testimony of Healing
It is a great joy to acknowledge... 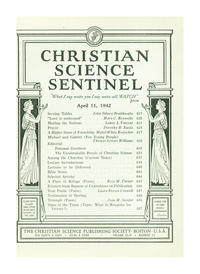