In the first chapter of Genesis we are told that "God created man in his own image;" and in the opening words of the succeeding chapter it is stated, "Thus the heavens and the earth were finished, and all the host of them."

But mankind in general, failing to comprehend this premise, has based its concept of man on the allegorical account in the second chapter of Genesis, wherein it is stated that a mist went up from the earth, "and the Lord God formed man of the dust of the ground, and breathed into his nostrils the breath of life." In the continuation of this allegorical account, woman was said to be taken from man. Later on, mankind becomes the subject of Job's doleful lament, "Man that is born of a woman is of few days, and full of trouble." 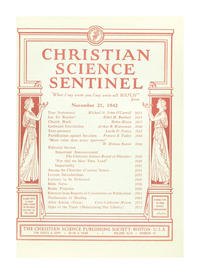