A Christian Science period in the "Columbia West Coast Church...

A Christian Science period in the "Columbia West Coast Church of the Air" series was conducted from Station KROY, Sacramento, California, on Sunday morning, August 17, 1941, at eight o'clock (Pacific Standard Time), by Mr. Frank H. Thompson of Sacramento. This program was given under the auspices of the Committee on Publication for Northern California with the approval of The Christian Science Board of Directors. Mr. Charles L. Merrick, soloist, was assisted by Mrs. Maude MacSwain at the organ.

The program opened with Hymn No. 238 from the Christian Science Hymnal. 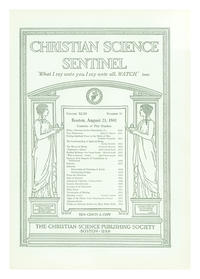