On page 35 of the Christian Science textbook. "Science and Health with Key to the Scriptures" by Mary Baker Eddy, we read, "This spiritual meeting with our Lord in the dawn of a new light is the morning meal which Christian Scientists commemorate." The miraculous draught of fishes which heralded this meeting of the disciples with their risen Lord on the shores of the Sea of Tiberias, has been liable to overshadow an event of far deeper significance to the world which took place immediately after. This was the spiritual awakening of Jesus' little band of followers, who a few hours earlier seemed to have forgotten the precious teaching which had been theirs. Miracles no less wonderful than that of the draught of fishes had been witnessed by them many times; their Master had told them that these results were the reward of prayer and fidelity. But it would appear that of such things they had not been thinking as they waited for their nets to fill.

While he was with them they had accepted him as the Christ; they had followed, obeyed, believed in him; nevertheless it had not prevented them from going back to their fishing; it had not prevented them from toiling all night and catching nothing. And why? Because they were still thinking of a human Jesus, who had been with them and now was withdrawn; they were still thinking of him and therefore themselves in terms of human contact and material evidence, not in the light of Spirit. 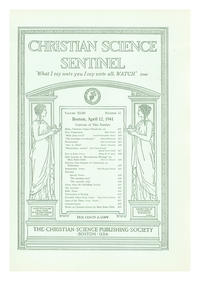