Christ Jesus is the greatest example of steadfastness in the face of adversity the world has ever known. Notwithstanding the fact that he had showered untold spiritual blessings upon his fellow men, healing them of disease and sin and enlightening them on the greatest of all themes, the love of God, the Father, with the exception of a comparatively small number they rounded upon him and persecuted him even to the limit of the Roman law.

Not long before he passed through his greatest ordeal, that of the crucifixion, which preceded his demonstration that life is indestructible, Jesus addressed his disciples, who were sorely oppressed at the thought of his leaving them. He desired to comfort and cheer them; and he did so out of the depths of his understanding. "These things I have spoken unto you, that in me ye might have peace," he said. "In the world ye shall have tribulation: but be of good cheer; I have overcome the world" (John 16:33). Jesus had overcome the world: he had mastered the material sense of things. Tribulation might come upon them; but with understanding of and faith in God, the mastery over it would be theirs also. 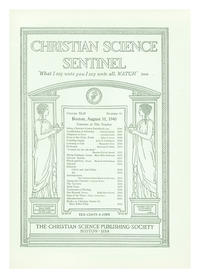