All that I am today I owe to Christian Science

All that I am today I owe to Christian Science. When it came into my life I was a wanderer, searching and hungering for righteousness. I had gone from one orthodox church to another. I could not persuade myself to believe that God was revengeful, sending sickness, sorrow, even death, to His children.

I had very poor health, and many seemingly unbearable problems, and I saw no hope of relief. On New Year's Eve, in 1913, I humbly prayed that I might in some way have God revealed to me, so that I might place my faith in Him, pray to Him, and have my prayers answered. A few days later my husband met a peddler whose pushcart was loaded with discarded books, which he was selling. Thinking of first editions, my husband examined the lot, and there was a copy of "Science and Health with Key to the Scriptures" by Mary Baker Eddy, which he bought for five cents. All that we knew of Christian Science was that it was criticized and condemned, and through curiosity we began to read the book. I had read only the chapter on Prayer, when I realized God had answered my plea. The more I read, the more I wanted to read. I kept repeating to myself, "I have found the 'pearl of great price.' " It changed my whole attitude toward life, and my problems seemed easier to solve. I read it, not for healing, but for the peace and harmony which it was bringing into my life. Then my health began to improve, and I learned that Christian Science heals all diseases. 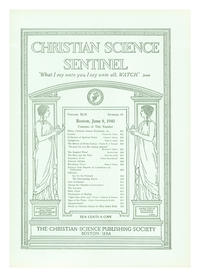