The Remedy for War

Confronted as the world finds itself today with the unleashing of evil in its worst forms by the outbreak of war with all its consequent sufferings and horrors, mankind seems to be unable to establish the longed-for lasting peace, or to find a solution of the fundamental problems which seemingly have led to resort to every means of destruction and violence that so-called science has devised. A further difficulty seems to be the lack of any satisfactory reason why, having put their all into the arbitrament of war, either side can be certain of ultimate victory; so that, except for a belief that a just cause must prevail, entire reliance is placed upon the uncertainty of material means.

Many people uninstructed by Christian Science accept the inevitability of war and even believe they see in the records of the Israelitish wars an evidence that God actually directed His hosts against their enemies. That war is no part of God's perfect will is, however, gradually becoming recognized by thinking people. 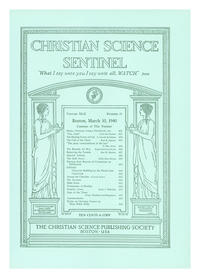