Man, the Image of Mind

IT is characteristic of the human mind to resist spiritual truths which, if accepted, would constitute the solution of its various problems. Not only is there a reluctance on the part of this so-called mind to accept the truth about any situation, but often a vehement repudiation of the statement that evil is a false state of thought.

"Can I not see it?" the troubled one may question, as he refers to some pressing suggestion calling itself a sick body, a failing business, or lack of supply. Often he supplements visual testimony with corroborating reports from the other so-called physical senses, and then challenges one to refute such overwhelming proofs of the reality of evil. 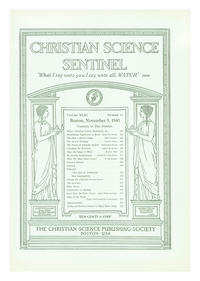