For the many blessings that are mine through Christian Science...

For the many blessings that are mine through Christian Science and the application of its teachings, I am indeed very grateful. In Science and Health Mrs. Eddy has written (p. 66), "Trials are proofs of God's care." I am grateful that each healing I have had in Christian Science has proved to me God's infinite care for His children, and I am striving continually to be more grateful that we are all protected by His care.

My first healing in Christian Science, an instantaneous one, was of the drinking habit. This form of error had existed in my experience over a period of years, and had reached a stage where it claimed complete dominion over me. It was at this time that I called on a Christian Science practitioner for the first time. The reason for making this call was entirely apart from anything akin to drinking, nor was this subject discussed during our conversation. While I was in the practitioner's office many of the simple truths of Christian Science were explained to me. My concept of God had been for the most part incorrect, and it was now explained to me that God is compassionate, infinite Love. The Christ, or Truth, was revealed to me, through Christian Science, as the divine manifestation of God. I was told to read Science and Health by Mrs. Eddy, and to keep continually in thought the truth about God and man. After leaving the practitioner's office, I entered a near-by bar to indulge in a drink or two of whisky, as was my custom. It was at this time that I was amazed to find that all desire for drink had left me. I could not realize what had taken place, and for a week or so I tried to acquire the taste I had formerly had for alcohol. Gradually it was revealed to me that I had been healed of this desire while I was in the office of the practitioner. For this healing I shall always be very grateful, and also for my clear realization, due to this healing, of the omnipotence of Truth to overcome completely and permanently any discordant condition.

Send a comment to the editors
NEXT IN THIS ISSUE
Testimony of Healing
Christian Science has brought many blessings into my... 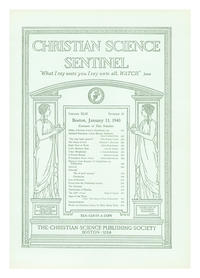