The Characteristics of a Christian

No one who studies Christian Science conscientiously need be in any doubt as to what are the characteristics of a Christian. As understood in Christian Science, a Christian is a follower of Christ Jesus, one who is instructed in the letter and the spirit of his teachings, and is actively engaged in putting these teachings into practice.

Christian Science throws great light on the Master's words and works recorded in the Gospels of the New Testament, elucidating the Science which inspired and sustained them. Hence, if one would learn what Christianity is, and how to practice it, he has but to study Christian Science without bias, and in humility, even as its Discoverer and Founder, Mary Baker Eddy, has stated it in "Science and Health with Key to the Scriptures" and her other writings. 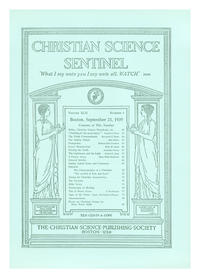