The Cross and Crown

There are two events in history which have made a profound impression upon human thought, although mankind as a whole has not yet come to appreciate their full import—the crucifixion and the bodily resurrection of the great Master of Christianity, Christ Jesus. The three years' ministry of Jesus had been leading up to the period when he was to make his great human sacrifice on behalf of mankind, and had been a preparation for the tremendous demonstration of restoring his human body, which the persecutors of his sublime teaching had declared to be dead, a demonstration which was soon afterwards followed by his ascension above all physical and bodily conditions, to the full consciousness of his spiritual unity with God.

Jesus had declared his intention to raise his own body from the dead after its seeming destruction. "Destroy this temple, and in three days I will raise it up," he said. Moreover, he had asserted the necessity for this act, that the Comforter might come to his disciples: "Nevertheless I tell you the truth; It is expedient for you that I go away: for if I go not away, the Comforter will not come unto you; but if I depart, I will send him unto you." 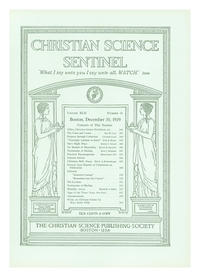