Mr. Harrison, before coming to The Christian Science Monitor in 1922, was for nineteen years in newspaper work in New York City. He is a graduate of Cornell University. Among the newspaper positions he filled were those of Day City Editor and Night City Editor of the New York Herald. He also was associated with the Brooklyn Standard Union and the New York Times. His first work with the Monitor was as News Editor. 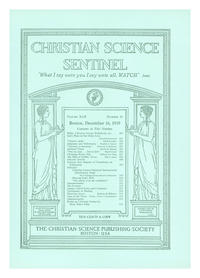