In Joel we read, "I will restore to you the years that the...

In Joel we read, "I will restore to you the years that the locust hath eaten." Christian Science has restored to me the years eaten by sickness, suffering, disappointment, and grief. All my life, prior to taking up the study of Christian Science, I suffered from poor health and was forced to give up the things that I wanted and needed to do. I could not remember the time when I was not under the care of physicians, many of whom were honest, conscientious men and women, devoting their lives to helping mankind to the best of their ability.

Two operations had left me in a weaker and more hopeless conditions. About this time my mother and brother passed on, and it seemed that nothing remained for which to live. I had been confined to my bed the greater part of the time for two years, and the doctors could give me no hope of ever being well. As a last resort, some kind friends sent me to the southwest, hoping that the milder climate would do for me what the doctors had not been able to do. However, I was again to be disappointed, for my condition grew worse and I found myself alone, almost without funds and knowing that the end could be only a short way off. The physical suffering was so intense that I had no relief day or night. As our revered Leader says in "Retrospection and Introspection" (p. 23): "Previously the cloud of mortal mind seemed to have a silver lining; but now it was not even fringed with light. Matter was no longer spanned with its rainbow of promise. The world was dark. The oncoming hours were indicated by no floral dial. The senses could not prophesy sunrise or starlight."

Send a comment to the editors
NEXT IN THIS ISSUE
Testimony of Healing
With a heart filled with a gratitude that cannot be... 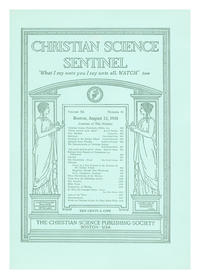