When I was a young man, I was a faithful worker in an...

When I was a young man, I was a faithful worker in an orthodox church. At the age of eighteen I first heard of Christian Science. There were only three families interested in this Science in the little town in which I lived at the time, and I was invited to attend the services, which were held in a private home.

My first experience in this wonderful truth—revealing God as infinite Life, Truth, and Love—satisfied the longing I had always had for a better understanding of the Bible, which my church did not seem to give me. I often talked with the pastor of my church on the subject of Christian Science. He tried to discourage me, but nothing he could say changed me. I always said that if it were ever necessary I should give Christian Science a trial. That time came. When I was working on a farm, threshing grain, I was sun-struck. I regained consciousness and for some time was able to work, but then I got worse, and when I reached my home I felt as though I were passing on. My brother telegraphed to a Christian Science practitioner, who lived about twenty-six miles away, asking him to treat me and to come on the first train. He arrived at two o'clock and at four o'clock I walked to the depot with him, a distance of four blocks.

Send a comment to the editors
NEXT IN THIS ISSUE
Testimony of Healing
Christian Science is the greatest blessing that has ever... 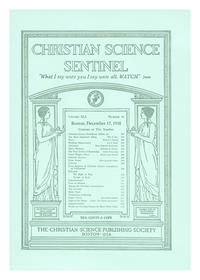