Since babyhood I have been taught in Christian Science...

Since babyhood I have been taught in Christian Science to be governed always by divine Principle, God. I attended a Christian Science Sunday School and learned to read and study the Lesson-Sermons in the Christian Science Quarterly. When I was a few months old I was cured of bronchial pneumonia by Christian Science treatment, and a few years later I was healed of diphtheria. At the age of nine, while visiting an aunt, I had a severe attack of earache. Since I was away from the help always received at home, I began at once to read in Science and Health by Mrs. Eddy the chapter entitled "Christian Science Practice," as I had seen my mother do. I believed implicitly the letter of whatever I read, but I had always wondered about the location of "the secret place of the most High." Suddenly it came to me that it was in prayer and in at-one-ment with God. The finding of the secret place filled my thought with such joy that I was instantaneously healed. Since that time, through the Word of God as revealed in Christian Science, I have been healed of tonsillitis, measles, fevers, colds, ivy poisoning, sprains, and other aches and pains of various sorts.

Throughout my school life the protective and guiding power of Christian Science has been proved in many instances. Through absolute reliance upon divine Love, I was provided with the financial means for obtaining a college education. Thoughts of envy, strife, and hatred have been met and mastered through the acknowledgment that the one supreme, ever-present Love is the only attraction. When I was elected the head of the student government of a campus of about eight hundred, the desire came to me to realize that all are directed and governed wisely. I was greatly strengthened in this realization by the prophecy of Isaiah, "And the government shall be upon his shoulder." Problems of the campus activity were always solved when I could follow the command in our textbook (p. 393), "Be firm in your understanding that the divine Mind governs, and that in Science man reflects God's government." Being the only Christian Scientist in the college, I found it my privilege to bring about lovingly, through The Christian Science Monitor, corrections of many false impressions of Christian Science. The Monitor was held in great esteem and admiration, as faculty and student alike read it and recognized its worth. Aid for all my daily studies, themes, and recitations came to me through this channel, and this paper was invaluable in all my curricular and outside reading. 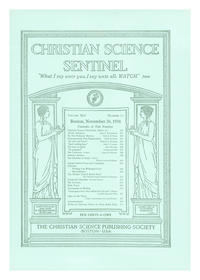