A dictionary definition of "sentinel" is "one who watches or guards." When an army is encamped, sentinels are posted to watch lest an enemy break through the lines or a surprise attack be made. Likewise, it is necessary to post sentinels in thought, lest that which is harmful to one be accepted as part of his real nature.

One of the sentinels which we may post is alertness. Mrs. Eddy, the Discoverer and Founder of Christian Science, recognized the advisability of this to such an extent that she incorporated a By-Law in the Manual of The Mother Church which she named "Alertness to Duty." It reads (Art. VIII, Sect. 6): "It shall be the duty of every member of this Church to defend himself daily against aggressive mental suggestion, and not be made to forget nor to neglect his duty to God, to his Leader, and to mankind. By his works he shall be judged,—and justified or condemned." Aggressive mental suggestion is not a mystifying expression when it is understood as a term used to designate the persistent endeavor of the so-called carnal mind to influence thought to accept its claim to power, when in reality it is but the false belief that there is another mind besides God, good. If we reason that God is Truth, and that man, made in His image, must of necessity express truthfulness, wisdom will direct us to take what steps are necessary in correcting specific instances of seeming dishonesty. Thus we shall refute the lie about man, and we shall see the proof of our correct thinking in honesty expressed to us. In the same way, when we are alert and refuse to accept a suggestion of headache or other ill, in spite of material sense testimony, we shall be rewarded by proofs of harmony. 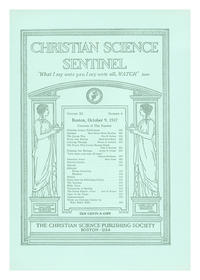