A CONSIDERATION of the Gospel record of Christ Jesus' experiences impresses the student with the fact that with him Christian preaching and practice were conjoined; and it is also evident that the Master expected this co-ordination to distinguish the lives and Christian works of his followers. Not only did he set a perfect example for others in his loving life and in his healing and redemptive works, but he gave instruction to the disciples, so far as they were able to receive it, whereby they might have their faith supported and strengthened by spiritual understanding. According to the custom of the time, Christ Jesus taught by parables even more than by precept, but in all things he substantiated his spiritual declarations by his healing works, thereby offering an unanswerable argument to his opponents, and a practical appeal to those who were sick or heavy-laden with sorrow.

Desiring to lift the thought of men from the low level of materialism into the realm of the mental, wherein they would be more responsive to spiritual facts, Christ Jesus said to the multitude, "Hear, and understand: Not that which goeth into the mouth defileth a man; but that which cometh out of the mouth, this defileth a man." This saying offended the Pharisees, who were concerned chiefly with the letter of the Levitical law, which, in its provisions, forbade the use of certain foods by the Jews. The Master, recognizing the erroneous nature of the thought which would assign spiritual significance to an ordinance designed in part, perhaps, as a sanitary measure, and which dealt with merely material routine, told his puzzled and inquiring disciples not to argue with the Pharisees. And he said, "Every plant, which my heavenly Father hath not planted, shall be rooted up." To some this last statement may seem unrelated to the criticism of the Pharisees, but Christian Science reveals its simple meaning and shows its practical application. 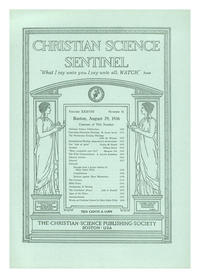