A dictionary defines "patriostism" as "love of country; devotion to the welfare of one's country;" and a "patriot" as "one who loves his country and zealously supports its authority and interests." He loves the traditions and history of his fatherland, the land of this forefathers.

What is fatherland, scientifically understood, in the terms of Christian Science? It is the land of the Father, man's real Father, namely, God. Therefore, the Christianly scientific patriot is one who loves the land of his Father, God, in which live all God's children, all having the same Father. But since God expresses fatherhood to all creation, the scientifically enlightened patriot loves all mankind, not just a single nation and its citizens. 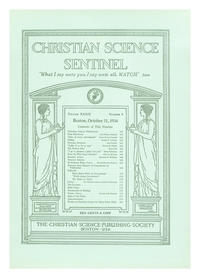