In your issue of February 28, under the heading "Missionary Society,"...

Roy G. Watson, Committee on Publication for the State of Texas,—Seguin

In your issue of February 28, under the heading "Missionary Society," you carried the following statement: "Mrs.—very ably presented the February study topic, 'The Unknown God—Unknown to the Christian Scientist.' Mrs.—then gave some interesting facts about the subject 'Christian Science.'" Inasmuch as I am sure that it was not your intention editorially to give it as your opinion that God is unknown to Christian Scientists, and since this editorial opinion was probably written by one of your correspondents rather than by one of your regular reporters or editors, I feel sure that you will permit me, as the spokesman for Christian Scientists in Texas, the courtesy of space for a reply.

Send a comment to the editors
NEXT IN THIS ISSUE
Article
In your issue of October 12 a clergyman criticizes Christian Science,... 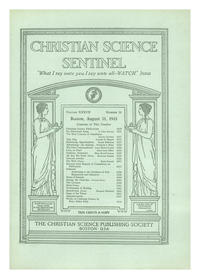