Many years ago Christian Science was brought to my...

Many years ago Christian Science was brought to my attention and it appealed to me principally as a beautiful religion. As I began to apply the teachings of this Science, as given in "Science and Health with Key to the Scriptues" by Mary Baker Eddy, discordant physical conditions from which I had suffered for years disappeared.

For our four children, problems such as croup, whooping cough, measles, scarlet fever, and chicken pox were quickly overcome or prevented from developing. I have had many experiences myself proving God's presence and power. Neuralgic headaches of nine years' standing were completely healed; also what was diagnosed by a doctor as intestinal indigestion, which kept me on the strictest possible diet for five years, was entirely overcome. For years now I have been able to eat what is set before me and give thanks.

Send a comment to the editors
NEXT IN THIS ISSUE
Testimony of Healing
I should like to testify that the healing of sickness... 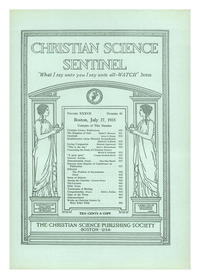