A city is a symbol of co-operation. The pioneer depends upon himself, and when there is a family all its members must exercise ingenuity in what may be called self-service. But in a city multifarious duties are divided among many. The pioneer works in the day. Of him it may be said, "The sleep of a laboring man is sweet whether he eat little or much." But "the city never sleeps," it is said; always, night or day, there are toilers laboring for the welfare of the citizens.

There have been great cities which have passed into oblivion. Their ruins are eloquent reminders of the words of Jesus, "Every city or house divided against itself shall not stand." The writer of the epistle to the Hebrews was enamored with the idea of an established and enduring city. "Here have we no continuing city," he said. In a previous chapter when coming to the roll call of the men and women characterized by faith, naming Abraham among them of course, of the father of the faithful he said, "He looked for a city which hath foundations, whose builder and maker is God." Of many others who were "strangers and pilgrims on the earth," and, being such, confessedly were seeking what Abraham sought, it is said, "They desire a better country, that is, an heavenly: wherefore God is not ashamed to be called their God: for he hath prepared for them a city." 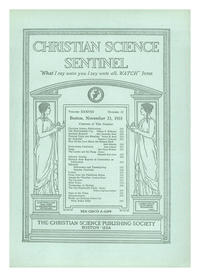