A STUDENT of Christian Science, having become a member of The Mother Church and of a branch church, was placed on active duty on a branch church committee. He found the work so pleasant, profitable, and uplifting that he began a study of the authority through which this appointment had come to him and which was bringing so much good into his experience. In the first place, he found that this appointment had been definitely authorized, the work designated, and his ability enhanced by an authority expressed in a natural and orderly manner. He traced this fact to the Church Manual, wherein he found the activity of church work provided for and authorized.

Government under the Church Manual is unique, and church members voluntarily and willingly place themselves under its authority, the church membership being recruited from the ranks of those throughout the world who have been touched by the healing power of Christian Science, who are grateful for the benefits received, and who are actively applying this teaching. By placing themselves under this government and obeying its requirements, members are in position to receive the maximum benefits from Christian Science and to aid in bringing the truth to others. 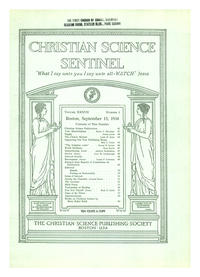