"He that shewed mercy"

By his words and his deeds Christ Jesus made plain the fact that life, intelligence, and health are not subject to matter. His healing power evidenced the unchanging perfection of God, who governs His creation through His law of harmony. Not only did he thus reveal the nature of the divine Being, but by instruction, parable, and example he showed men that if they would know the tender compassion of God and be at peace they must themselves in their living manifest the divine qualities which God expresses in man, His perfect likeness.

The Master made this fact clear in his parable of the good Samaritan, so that the lawyer who had asked him, "Who is my neighbour?" was led to answer his own question. Having illustrated the point, Jesus asked his questioner which, in his opinion, "was neighbor unto him that fell among the thieves," and the lawyer replied, "He that shewed mercy." It is recalled that Jesus presented in this parable several types of thought, showing the selfish and the indifferent attitude held by the priest and the Levite—neither of whom did anything to help the one in need—and the better condition of thought which was manifested by the Samaritan, in his quick recognition of another's need and his ready effort to share with the wounded man what he himself possessed of good. He "bound up his wounds, pouring in oil and wine," took the man to the inn, and when he departed he promised the host that he would repay him for any further needed expenditure. 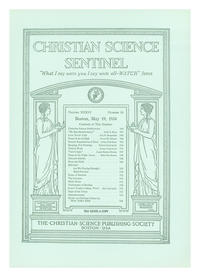