In Science and Health (p. 224) Mrs. Eddy states, "No power can withstand divine Love." The truth of this statement was proved to me five years ago when I experienced my first healing through the power of this Love. It overcame other so-called powers which had held me in bondage for more than two years, years filled to overflowing with intense pain, and with fear and discouragement. During this trying period I had resorted to many methods of material treatment, including those of physicians, surgeons, chiropractors, only to find, like the woman mentioned in the Bible, that I was "nothing bettered, but rather grew worse." The latter part of these two years found me confined to my bed. The diagnosis of the last specialist was that I had a defective spine, a carious hip bone, and an extremely bad condition of arthritis. His further verdict was that I should probably never walk again, but he said that an operation to remove the carious portion of the bone would be instrumental in prolonging my life. I would not consent to this, however, and prayed for a speedy death.

In the dark watches of the night, when the pains seemed unbearable, and opiates of the strongest variety failed to ease, a "still small voice" seemed to whisper, You do not need to suffer this way, nor need you die; you can be healed through Christian Science treatment. Although I had heard a little about this Science, that little was not much to its credit. Nevertheless I pondered these words the remainder of the night, for, while not very religious, I felt as though I had received a heavenly message. The following morning I told my husband about it, and asked if I might try Christian Science. He was only too glad to have me try anything which might help me; and that same day a friend called a practitioner for me. I shall never forget the first visit of that loyal, friendly person; and my heart will ever be filled with deep gratitude for all the wonderful help he has given me, for his never failing kindness, his ever-readiness to help me over the rough places. I had suffered much and must have been most trying at times. But he told me of a God of love, a God who does not afflict His children, but who is compassionate and merciful, ever present and omnipotent.

Send a comment to the editors
NEXT IN THIS ISSUE
Testimony of Healing
On page 179 of the Christian Science textbook Mrs. Eddy... 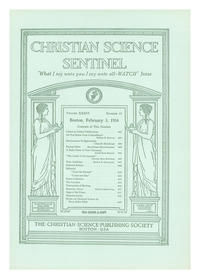