A STATEMENT of much interest to Christian Scientists may be found in Article I, Section 9, of the Manual of The Mother Church, where Mrs. Eddy says, "Without a proper system of government and form of action, nations, individuals, and religion are unprotected." All should be profoundly grateful that our Leader was divinely inspired to establish for The Mother Church a form of government that is based on divine Principle. Having this spiritual basis, it is distinctly democratic, with equal rights for all. Personal domination enters not into its activities.

That righteous government is evolved from the religious sense of a people is clearly seen from the experience of the children of Israel. Moses was chosen of God to lead them out of slavery, and they began the journey out of Egyptian bondage to the promised land of freedom under his leadership. God's clear revelation of Himself and His law found expression in the Ten Commandments, which are the basis of moral and civil law among Christian nations. It is clearly evident that the divine plan was for unity through faith in God. As God spoke to Moses, so he guided the children of Israel.

Send a comment to the editors
NEXT IN THIS ISSUE
Article
Peck Open Your Shells! 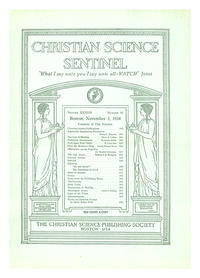