There is probably no issue which has recently engaged more attention throughout the world, and particularly in America, than the Eighteenth Amendment to the Constitution of the United States. In their school debating groups, students of Christian Science are not infrequently called upon to discuss the subject by the written and spoken word. If they glean their data regarding the subject from the public press, other than The Christian Science Monitor and a few other worthy periodicals, these students generally find themselves confronted with arguments foreign to the teachings of Christian Science. However, as loyal Christian Scientists, possibly as members of a Christian Science Sunday School, society, or church, it is manifestly necessary for them to consider the entire question according to the inspired Word of the Bible and in obedience to the teachings of the religion which they have accepted.

Turning to the Bible, an instance of exemplary obedience to established law will be found in the thirty-fifth chapter of Jeremiah, wherein is recounted briefly the history of the tribe of the Rechabites under the leadership of Jonadab. As one of the conditions essential to their continued existence as a nomadic tribe, Jonadab had prohibited the use of wine by them. Nebuchadnezzar, king of Babylon, had invaded Judah and had driven the tribe of the Rechabites toward Jerusalem. It was at this point in their experience that their obedience to the prohibition of Jonadab was tested. The Biblical record reads that "pots full of wine, and cups" were set before the Rechabites, accompanied by the invitation, "Drink ye wine." 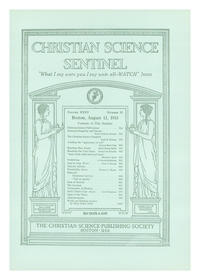