"They need not depart"

IN some of the beautiful Bible stories which Christian Science enables us to understand more fully, we are told of the wonderful way in which Jesus fed the multitudes who had followed him into the wilderness, there to listen so eagerly to his teaching about the kingdom of God that all else was forgotten until the day began to wear away and they realized that they were far from home with nothing to eat.

Then Jesus' disciples begged him to send the people away, that they might find or buy food for themselves; but Jesus replied, "They need not depart; give ye them to eat." The disciples, seeing that they were in a desert place, and the day far spent, pointed out that the only available food was a few loaves and fishes. What was that among so many? It was enough for Christ Jesus. He did not ask how few, but how many, loaves they had. He took the little there seemed to be and lifted thought to the abundance of Spirit, giving thanks to divine Love for His abundant provision. Then, blessing all, he gave to the disciples to give to the people, who were already seated, by his command, in quiet expectation of the good they were about to receive. Through listening to the truth which Jesus had given them, their thought had been made receptive, so that they were ready to be taught that God can indeed spread a table in the wilderness. 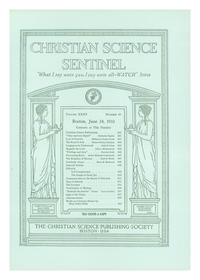