In all its experiences humanity employs a standard for measuring in one form or another. Thus we have, for example, the yard of silk, the quart of grain, the monetary unit, and the year. These are accepted because they are convenient and sufficiently invariable to be adapted for general use. Through their experiments, however, natural scientists have shown that the material world is undergoing a process of constant change, and that no conclusion based on matter can be absolutely accurate. The Christian Scientist has been taught to turn from this field of calculation to the spiritual universe in order to discover unalterable Truth.

A definition of "rod" given in a dictionary is "power." Metaphysically interpreted, this means spiritual power, with which all human action can be measured in order to determine what in it is real and what unreal. An illustration of this occurs in Exodus, where it is related that Moses and Aaron, his brother, were endeavoring to persuade Pharaoh to allow the children of Israel to leave Egypt. In different ways they were trying to prove to him that God was supporting their purpose. Moses was led to tell Aaron to cast down his rod before the king, and it turned into a serpent. Then Pharaoh called his magicians and sorcerers together and they threw down their rods in imitation of Aaron, and they also became serpents. But, "Aaron's rod swallowed up their rods." 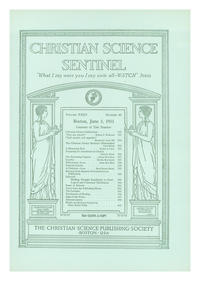