"There is lifting up"

In Job we read, "When men are cast down, then thou shalt say, There is lifting up." This is the glad message of Christian Science, "There is lifting up"—to adopt the Scriptural phrase. To those struggling, perhaps hopelessly, with the difficulties of sin or sickness, and the inexorable verdicts of medical laws, so called, or with lack of any kind, or bondage to false appetite, Christian Science says, Not death, but life reflecting Life, now!

The Science of Christianity reveals the divine Principle underlying Christ Jesus' ministry, in which he proved sin, disease, and death to be powerless because he knew God as Life; as eternal, ever present Truth; as good shining forth for all to share in human experience. Jesus did nothing of himself; all his works were to prove the truth of God's allness. He had no respect for material laws, but superseded them with the law of Spirit. He met the malice of his enemies with the weapons of divine Love; and his absolute reliance on God lifted him above the false accusations and destructive activity of the carnal mind, enabling him to prove by his resurrection that only a false belief of life in matter claims to hold in itself the issues of death, and that Life is the reality of being. Summing up the practical application of this glorious example, the Apostle Paul said, "For the law of the Spirit of life in Christ Jesus hath made me free from the law of sin and death." So-called human goodness never gets beyond the limits of the human; but the Christ lifts one's consciousness above the material and earthly, thus revealing infinite goodness and perfection to be the true nature of man in the image and likeness of God. 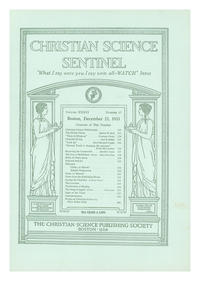