I should like to make some remarks with regard to references...

Nails A. T. Lerche, Committee on Publication for Norway,

I should like to make some remarks with regard to references to Mary Baker Eddy made in a review signed "A.A.," in Moss Tilskuer of 27. The writer of the review is quite right: it is a tale the author tells us about Mrs. Eddy. The tale is well told; but a critical reader with some knowledge of the Christian Science movement will understand that it is literally a fairy tale. It is an impossibility that "solely by her fantastical will-power" she should have been able to create a world movement which after her passing, more than twenty years ago, has steadily grown, and has made numberless persons healthier and happier.

In New York a book by an Episcopal clergyman, Dr. Lyman P. Powell, has been published, "Mary Baker Eddy: A Life Size Portrait," and there is now a Swedish translation of this book. The writer, after studying the movement at first hand and being given opportunity to make direct investigations relative to Mrs. Eddy's life, gives us a picture of her entirely different from that in the book reviewed by "A.A," and one in accordance with the facts. 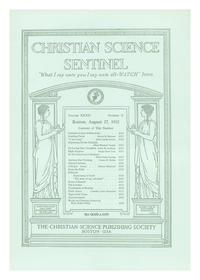