It is as possible to walk with God now as it was in the days of the patriarchs or of the prophets of Israel, or as in the time of Christ Jesus—if one knows the way. In Genesis it is told that Enoch walked with God, and how this led to his translation. In chapter five are the words, "And Enoch walked with God: and he was not; for God took him." Mention is made of this wonderful achievement in the eleventh chapter of Hebrews, where it says, "By faith Enoch was translated that he should not see death; and was not found, because God had translated him."

How was Enoch's translation accomplished? Mrs. Eddy indicates the way when she writes (Science and Health with Key to the Scriptures, p. 214), "If Enoch's perception had been confined to the evidence before his material senses, he could never have 'walked with God,' nor been guided into the demonstration of life eternal." Enoch's perception must therefore have been spiritual. He must have had a clear realization of the nature of God as Spirit and Life, and of the spiritual nature of man, before he could have risen to such a high spiritual level as to be able to defeat the claim of death—a false belief of material sense. Later on Elijah had a similar experience. The prophet, like Enoch, walked with God so faithfully that ultimately he avoided death by being translated. Christ Jesus, too, after an unparalleled life of self-abnegation, was so spiritually enlightened that he overcame death, rose from the grave, and afterward ascended, as the Scripture has it. Jesus also was translated. 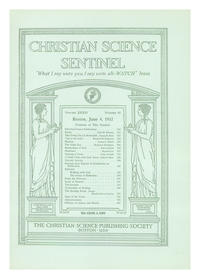