Mrs. Eddy accepted the authority of Jesus as God-bestowed and complete, and breathes this assurance through all her writings. The Nazarene's "I say unto you," so often recorded of him in the Gospels, even when his words refuted the accepted doctrines of the Jews, carries an assurance of authority which is unmistakable. It has the ring of truth because he proved his words by his works. Many of the auditors of Jesus were conscious of the truthfulness of his teachings, for the depth of his own assurance carried conviction to them. The Scriptures declare that "the people were astonished at his doctrine: for he taught them as one having authority, and not as the scribes." Not through the statement of unproved dogma and doctrine did he convince his hearers, but as one who spoke from definite and accurate knowledge, from complete understanding, and out of the depth of the heart. Because Jesus proved his words to be true, his authority was unimpeachable.

Whence came this assurance recognized as having divine authority? What was its source, and how did Jesus acquire it? are questions that arise with every honest inquirer. The source of his authority lay in his perfect understanding of the nature and character of God, of the real man as the son of God, of creation, and in his complete faith in God growing out of that understanding. Jesus knew his true selfhood to be the reflection and expression of Deity; he knew that he was the Son of God; and this understanding so unfolded as he progressed that he was ever conscious of God's power and presence—ever conscious that God was both omnipotent and omnipresent. This definite knowledge enabled him to pray aright, to pray so scientifically that invariably his prayers were answered. 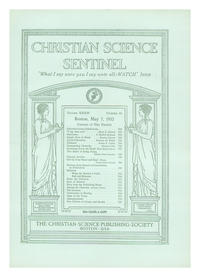