Matter, however beautiful and imposing in structure, form, and color, never generates spiritual aspirations. But on careful analysis it will be seen that material thoughts often seem to generate physical thrills of fear or ecstasy. Nothing imperishable, immortal, can be caused by that which is perishable, mortal. If in viewing a great painting, gazing on an enchanting landscape, or contemplating the vaulted ceiling of an awe-inspiring temple, one is touched by lofty, spiritual thoughts, it is not the material picture, landscape, or building that stirs these heavenly aspirations; rather is it the awakened spiritual sight which sees through and beyond the material and catches a clearer glimpse of that reality of which the material is but a poor counterfeit. Spiritual consciousness alone lays hold on God. It sees through and beyond all that is unlike Him. It has no possible union or partnership with matter. No spiritual inspiration ever comes from matter. Mrs. Eddy writes (Retrospection and Introspection, p. 47), "Christian Science shuns whatever involves material means for the promotion of spiritual ends."

Why, then, do Christian Scientists have to build material churches and a material Publishing House? In reply, it may be said that no Christian Science congregation could ever properly build a church unless the spiritual structure had first appeared in consciousness. "Our church is built on the divine Principle, Love" (Science and Health with Key to the Scriptures, by Mary Baker Eddy, p. 35). Principle is the source of all supply. A material Christian Science church or Publishing House is the visible externalization, to human sense, of spiritual inspiration. Or, to put it more accurately, it is the sign that the mist of matter is fading away. Through Christian Science, men are working out of the belief in the reality of matter. The belief gets thinner. Emergence is going on. The grosser forms of belief disappear first. 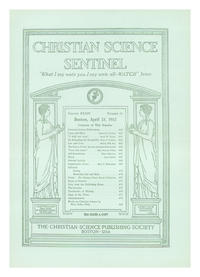