A girl came home from school one afternoon with her arms filled with books, and announced that she was to have an examination the next day. Her mother asked her if she would be able to accompany the family to a musical recital that evening and was told that it would be impossible. In explanation of her decision the daughter said that she would be fortunate if she completed her studies that night, even though she worked quite late. The mother then asked if she had not been making good grades up to this time, and the daughter replied that she had made excellent grades, had grasped the various subjects readily and thoroughly, and had enjoyed them all. Thereupon the mother asked if, after all, an examination was not an examination of what had already been learned, rather than an ordeal for which preparation must be made in a final frenzy of prolonged study the night before.

It was further pointed out that this was a very good time to prove her divine ability to express the intelligence of Mind. The girl saw the point and quickly took advantage of her opportunity. She started to make an examination of her mental attitude and immediately saw how greatly it needed correcting. She pondered what she had learned in Christian Science and remembered that man reflects God, the all-knowing intelligent Mind; that man as God's child reflects all the qualities of Mind, such as ability, capacity, clarity, intelligence, understanding, and that she could use these accurately in all cases. She felt that she had studied diligently and honestly at all times and had a right to expect correct direction. Since she reflected perfection, she could express it through accurate answers. These thoughts freed her from any sense of fear, and she decided to attend the recital with the family. The next day she found her thought free and clear, and answered the questions easily, making a very good grade. 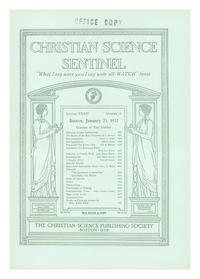