It is over nine years since I began to study Christian Science. I read nothing else, and tried to apply what I read as best I could to my problems; still I felt that I was not making the progress I should, but seemed to be standing still. After searching my thinking I still did not seem able to find out just what was holding me back, so I asked a Christian Science practitioner for help. The first thing she asked me was if I had ever had a healing in Christian Science. I told her I had had many of them; and she then asked me if I had ever given a testimony in Wednesday evening meetings, or if I had ever sent one to The Christian Science Publishing Society for publication. I told her that I had not, and she very lovingly pointed out to me that all this time I had been getting and not giving. I then realized that we must give, for truly "it is more blessed to give than to receive."

With a heart full of gratitude I should like to tell of my first healing in Christian Science. I had been very ill with pneumonia and almost passed on; and when the doctor pronounced me out of danger, he said that a power higher than his had brought me through. As soon as I was able to be moved I was taken to the home of my sister, who then lived in a small country town, as it was thought the country air would be beneficial to me. I had lost all my hair, and was almost a living skeleton. Instead of getting better I grew worse and worse; and finally my sister, very much alarmed, called the doctor. After an examination he pronounced me in a very bad condition, said that my recent illness had left me tubercular, and told her to send for my husband and my father, who were in another city, as I could live only a short while.

Send a comment to the editors
NEXT IN THIS ISSUE
Testimony of Healing
A small copy of the Christian Science textbook, "Science and Health with Key to the Scriptures"... 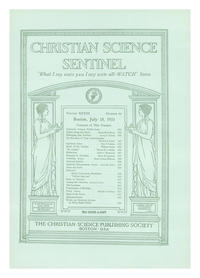