Mankind is earnestly seeking for salvation. Everyone needs to be saved from something which he believes is a veritable obstacle to his happiness and progress. In the endeavor to solve vexing problems, with great hope one may employ many material remedies—remedies which can bring only temporary relief. As one after another of these remedies is applied, with no permanent success, and as faith and enthusiasm wane, one may think in his ignorance that his case is hopeless, incurable; that his problem is unsolvable; that the only alternative, in fact, is stoically to endure.

Christian Science comes to each one caught in the meshes of such material thinking with the comforting assurance that there is a way out of all human difficulties. Since it is founded on the Bible, Christian Science has authority for pointing to the healing efficacy of the beautiful Biblical promises, which are as provable to-day as when they were first taught and practiced by prophets, and by the Master and his disciples. In the light of the Christian Science textbook, "Science and Health with Key to the Scriptures" by Mary Baker Eddy, the student soon discovers that many of the Scriptural passages which before seemed vague, and even contradictory, now reveal new meanings that assist him in the solution of his daily problems. 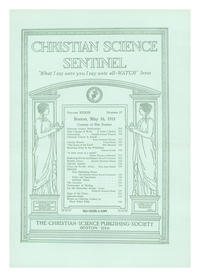