When men acknowledge God as the only power and yield to this power, they ally themselves to the spiritual forces of good, which lead to progress and success. On the contrary, when thought yields to evil influences, it becomes confused and darkened, and is led into discouragement and retrogression. "A double minded man is unstable in all his ways," says the Apostle James. Oftentimes, when through dire necessities hope has failed, one comes to see the inadequacy of corporeal sense and begins to reach out for spiritual power and strength. Thus does mortal thought yield to faith in God, wherein hope finds anchor and courage is restored. Through Mrs. Eddy's discovery of Christian Science the way has been revealed whereby one can understand God and intelligently utilize His power.

Like stars in the firmament stand out the inspired words of those who caught gleams of the omnipotence of good. Such, for instance, are the words of David as recorded in I Chronicles, "Thine, O Lord, is the greatness, and the power, and the glory, and the victory, and the majesty: for all that is in the heaven and in the earth is thine; thine is the kingdom, O Lord, and thou art exalted as head above all." 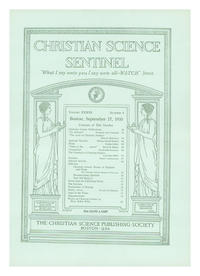