In your issue of Monday, July 14, there appears a report...

In your issue of Monday, July 14, there appears a report of a sermon by a bishop, dealing with the moral and intellectual unrest that now exists in England. In it there appears the statement that religion had degenerated and fantastic types of belief, such as spiritualism, Christian Science, and magical sacramentalism, had gained new validity; and then it goes on to speak of these as "crudities." May I point out to your readers that Christian Science has nothing whatever in common with either spiritualism or magical sacramentalism, and that though Christian Science may seem a crudity to rationalistic intellectualism, yet to the one who understands it and can demonstrate its truths in healing the sick and the sinning, it is found to be the theology of Jesus which accounted for his mighty works.

Christian Science is a return to the primitive Christianity practiced in the first three centuries of the Christian era, which healed the sick. It teaches that (Science and Health with Key to the Scriptures, by Mary Baker Eddy, p. 131) "the mission of Jesus confirmed prophency, and explained the so-called miracles of olden time as natural demonstrations of the divine power, demonstrations which were not understood. Jesus' works established his claim to the Messiahship." Christian Scientists are certainly endeavoring to carry out the commands of Jesus, "Go ye into all the world, and preach the gospel to every creature;" "Heal the sick;" "Love thy neighbour as thyself."

Send a comment to the editors
NEXT IN THIS ISSUE
Article
Mrs. Eddy, the subject of an editorial, was born of devout... 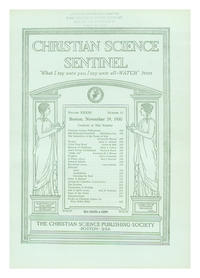