"The weapons of our warfare"

Paul's statement on the nature of the Christian warfare is particularly free from ambiguity. In the third and fourth verses of the tenth chapter of II Corinthians he writes, "For though we walk in the flesh, we do not war after the flesh: (for the weapons of our warfare are not carnal, but mighty through God to the pulling down of strong holds)." The apostle here makes a strong protest against the weapons of materiality, the weapons of the carnal mind, appraising spirituality as the means to be used by the Christian in "the pulling down of strong holds," the overcoming of evil.

There can be no room for doubt that Paul thought as did Christ Jesus on this question. And did not the Master during the whole of his ministry teach and demonstrate the power of good over evil, of love over hate, of spirituality over animality? Love inspired his every word, his every deed. In his Sermon on the Mount we find him reversing the practice of the Jews of his day in words which are as direct and plain as any ever spoken. In the thirty eight verse of the fifth chapter of Matthew's Gospel he says, "Ye have heard that it hath been said, An eye for an eye, and a tooth for a tooth." And in the forty fourth verse he continues, "But I say unto you, Love your enemies, bless them that curse you, do good to them that hate you, and pray for them which despitefully use you, and presecute you." There is no escaping the idealism which the great Way shower's words set forth. 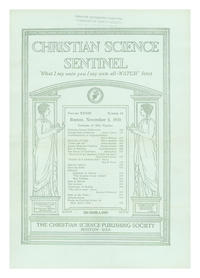