I am in a position to state authoritatively that the Christian Science...

I am in a position to state authoritatively that the Christian Science movement during the past few years has made enormous growth all over the world, and that it has never been in such a flourishing position as it is to-day. In South Africa alone during the past ten years, the registered organizations have increased from seven to twenty-one

The statement that the doctrine of Christian Science is not Christian because Christian Scientists do not accept every statement contained in the Apostles' or the Nicene Creed, is not justifiable. We are Christians only in so far as we follow the example of Christ Jesus, observe the Golden Rule, accept his teachings and put them into practice by carrying out his commands, including the one to heal the sick. Christian Scientists are striving to do this and are in a considerable measure proving their faith by their works. 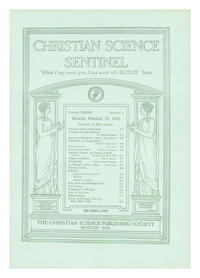