I am grateful to God that I have been brought into...

I am grateful to God that I have been brought into Christian Science. In 1925, it seemed imperative that I undergo an operation for exophthalmic goiter. My mother had been interested in Science for several years and asked me to try it, but I refused.

Although the operation was satisfactory, I returned home with the belief that my heart would never be sound again. Finally, after nearly two years of discouragement, I turned to Christian Science. A practitioner took up the work, and on February 11, 1928, I passed the highest medical test in commercial aviation, that of transport pilot. In July and August of the same year I took the student pilot's course of instruction at a local flying school. 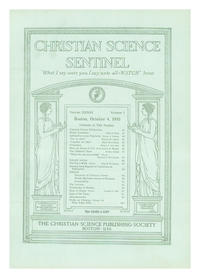