Humanity probably is concerned with no greater problem than that of maintaining health. The fact that mortals spend a large proportion of their time and effort in trying to attain it shows the high premium which is placed on it. The further fact that it has not been widely secured, proves that humanity has not been looking in the right direction for health; hence the many failures and disappointed hopes.

Christian Science has revealed to the world the divine verity that, as Mrs. Eddy says in "Miscellaneous Writings" (p. 298), "The true consciousness is the true health." The human so-called mind has for so long believed that health is material and governed by material conditions, that such a statement comes as a distinct shock to its age-long beliefs. That our Leader's statement is eternally true, however, can be proved in the personal experience of any earnest seeker for a right understanding of health and harmony. 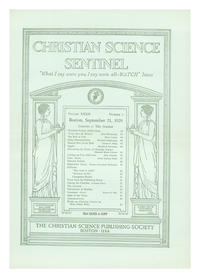