How often has the Christian life been referred to as a warfare! Christianity, as taught and demonstrated by Christ Jesus, has given to all who have accepted it a spiritual idealism, and it is between this idealism and the evil beliefs of the world that the warfare is waged. No Christian can escape the battle, because every mortal is tempted by evil.

The Christian Scientist, probably more than any other, is fighting this battle to-day. Christian Science has inspired him with the loftiest idealism, has indeed given him an accurate understanding of reality—God and His manifestation; and it is this enlightened spiritual understanding which enables him to combat evil, erroneous thinking in its every form, and to conquer it. To him the issue resolves itself into an effort to overcome every false concept of mortal mind through the understanding of its erroneous nature. He knows that God is infinite Spirit, infinite good. He knows, in consequence, that matter or evil is unreal. It is this knowledge which equips him to encounter and to overthrow mortal beliefs of every description. And the warfare will continue until every mortal belief has been vanquished. On page 569 of "Science and Health with Key to the Scriptures" Mrs. Eddy states the issue with her usual lucidity: "Every mortal at some period, here or hereafter, must grapple with and overcome the mortal belief in a power opposed to God." 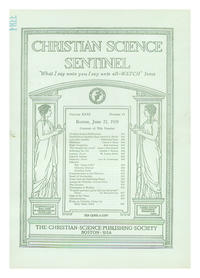